We laugh at his antics in the comedy show “Pepito Manaloto” but did you know that Ronnie Henares is a singer and composer? And by the way he is also a dancer and successful talent manager.

Anyway many moons ago Ronnie and good friend Jojit Paredes had a singing duo called TWOFUS (pronounced two of us). They wrote their own songs and also performed ‘60s and ‘70s hits like “If I Fell” by the Beatles, “All I have To Do Is Dream by The Everly Brothers, as well as Chad and Jeremy’s “Summer Song,” “From A Window” and “Mr. Diengly Sad”.

Growing up together in Pasay the two have been good friends since they were kids.  “Jojit and I were next door neighbors. We were in La Salle Taft for grade school together. He was a year ahead of me” Ronnie said.

Apart from being next-door neighbors, their friendship was strengthened by music, girls and parties.  They played in  a “combo” called Violet where Jojit played the guitar while Ronnie was one of the vocalists. 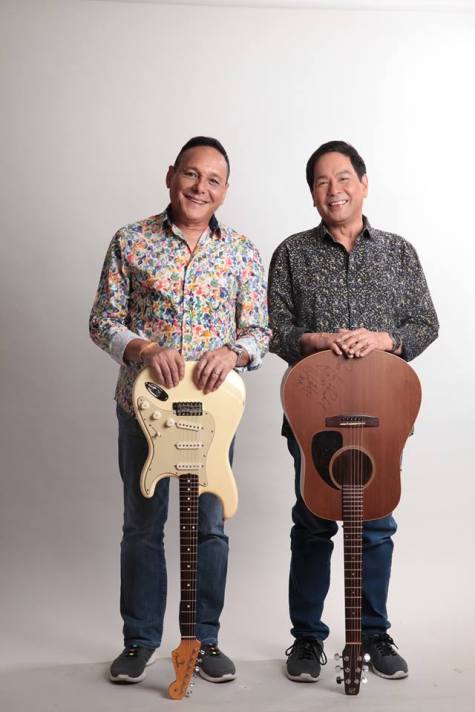 TWOFUS was born one weekend in a beach house owned by the Laurels. The two were out with their high school buddies (which included Cocoy Laurel).  In an interview with Justo Justo, Ronnie shared that he and Jojit were having fun singing and playing the guitar complete with vocal harmony. As expected their friends loved it.   “We started singing duets,  sabi ng barkada okey daw yung blending,” he said in the article.

Their beach performance was so memorable that they started receiving invitations to perform in campus shows all over Manila. In time, radio and TV shows heard about the talented and highly-articulate “cuties” who have been driving the  girls crazy.

According to an article written Donnie Ramirez during their first appearance on the noontime TV show “ABS Musical Extravaganza”   the phone board was jammed with calls.

But being obedient sons “TWOFUS”  had to lie low  shortly after high school. According to the article by Donnie Ramirez, they no longer had enough free time since they were about to enter college.  Ronnie took up Psychology in Ateneo and Jojit took up Political Science in Dela Lasalle.  Nevertheless the offer to guest in variety shows continued and soon they were back in the limelight.

Celebrity DJ  Ike Lozada introduced  TWOFUS   to Tony Santos the director of “D’Sensations” the highest- rated prime time TV show on ABS-CBN Channel 3. The show also featured Vilma Santos and Edgar Mortiz.  Ronnie and Jojit were immediately offered to be part of the permanent cast. It was said that the studio audience broke into a screaming frenzy when they performed.

Their first movie exposure was in “My Funny Girl” starring Tina Revilla opposite actor Sajid Khan. One of Ronnie’s classmates brought them to Tower Productions where they were asked to compose and record the theme song. They also appeared in the movie.

Fans of TWOFUS  are in for treat on Sept 1 as TWOFUS – Reunion of Friends” goes onstage at Solaire. They will be joined by good friends Jim Paredes, Boboy Garovillo, Mitch Valdez and the Aldeguer Sisters.

Photos for the article were from the FB pages of Mr. Jojit Paredes and the official  TWOFUS  Reunion of Friends page.